The Cops Arrested Two at Our Home Today (No Joke)

This morning, Christmas Eve morning, after we finished eating our pancakes, our doorbell rang. We had no idea who the two women at the door were and didn't recognize their mini-van. We ignored them, assuming they'd realize they had the wrong house and leave. They didn't.

After they sat in their van in our driveway for twenty more minutes, Judd went out to talk with them to see what was going on. He found them asleep. He knocked on the window and only roused the passenger who tried to wake the driver. The driver was out of it - completely high on something. She finally rolled down her window and spoke very slowly and incoherently to Judd. She tried to explain that they were trying to find some guy named 'D' who lived at our house. Judd assured her she had the wrong home, but she was so high and confused, she kept insisting that he used to live here and must have moved (we built our home and are the only ones who have lived here).

Judd couldn't help them because they were so out of it. They continued to just sit in their van in our driveway and wouldn't leave. So, after ten more minutes, Judd called the cops. I'm so glad he did. When the police arrived they noticed right away that the women were high and their car had major damage from where they hit something. The van wouldn't even start and the axle was broken. They gave the driver a sobriety test, which she instantly failed. The second girl failed her sobriety test too, but began arguing with the police officer insisting she was sober. They checked the van and found a toddler girl laying down, asleep, in the back seat. Her mom was the woman protesting. No wonder - she didn't want to lose her little girl. They also found the pills that made the women high. 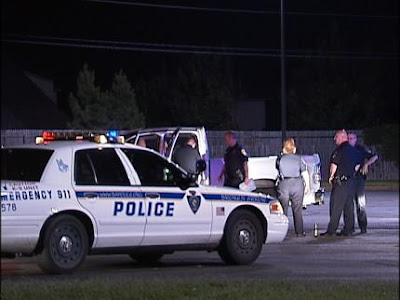 Poor innocent little girl. I wanted to slap some sense into that mom and bring the little girl inside where she could get warm and drink hot chocolate, but knew that wasn't going to help. There's no way that mom could hate herself more than she already does. She knows she's choosing drugs over her daughter's safety. But the little girl is safe - today. The police told the mom to call a relative to come get her little girl, or they would have DHS come take her because both women were going to jail.

A sister and brother-in-law showed up as did the owner of the van (appeared to be the little girl's grandpa). They said the women called last night saying they hit something with the van and were also lost (because they were out of it). The family had been worried about them all night, not knowing where they were. Who knows how long they were sitting in our driveway before ringing our doorbell this morning. They could have been their all night. The little girl was taken away by her aunt, the two women were hauled off to jail, and the broken-down van was towed out of our driveway.

We live in a nice neighborhood, so this was way out of the ordinary. I'm sure our neighbors are all very curious as to what was going on - and rightfully so. There were three cop cars, a tow truck, a strange van in our driveway, and two relatives' cars - all in front of our home. I'm so glad Judd called the police. Those women will probably wake up in a jail cell tomorrow - Christmas morning - and have much to think about as they sober up. May they find the peace they're searching for. May the little girl know she is a precious gift to this world. May the police officers know how thankful we are for their service - for protecting that little girl, and anyone in the way of a vehicle driven by someone under the influence.

I'm hugging my girls and husband a little tighter today and looking forward to a lovely Christmas.