Getting My Kids From My Heart to My Arms

Two and half years after Judd and I were married we wanted to start our family. That phrase always made me mad because Judd and I already were a family - just the two of us. Knowing Judd's medical history involved chemotherapy, we headed to a fertility clinic to find out if we had any obstacles to overcome. We were disappointed to learn that the chemotherapy had affected Judd's fertility. They said that it was completely possible that it would self-correct in time. It had only been three years since he finished his treatments.

So we waited, and prayed, and spoke God's Word over our lives and dreams. Years went by. On Mother's Day I would say, "This time next year I will be holding my baby in my arms". But the next Mother's Day arrived without my baby. And the next. And the next. And several more. Every night we continued to speak scripture verses about being parents. We particularly relied on Deuteronomy 7:14, "You will be blessed beyond all other people: no sterility or barrenness in you. God will get rid of all sickness." - The Message "Blessed art thou above all the peoples, there is not in thee a barren man or a barren woman." - Young's Literal Translation "You will be blessed above all the nations of the earth. None of your men or women will be childless" - New Living Translation. Well then. There we had it. Right there in our Bible God told us that we would have children, and they would come from our bodies.

Years continued to go by as we stood on this and other scriptures. After being married for seven years we headed to the fertility clinic again. We were reminded that Judd froze his "genetic contribution" prior to beginning chemotherapy. Would it be any good after 10 years in chryogenics? Since my insurance covered partial costs for artificial insemination, and it was a fairly simple procedure, we opted to try it. I went to countless doctor's appointments after work for two months. I took pills and gave myself shots in the stomach to time my hormones to the doctor's specific timeline. Our first try at artificial insemination was unsuccessful. So was the second. So was the third. Those six months were an emotional rollercoaster. I needed a break. Time to regroup. Time to spend with dying mother. Time to just be.

The doctors told us that in vitro would be our only option for having biological children. Judd and I really wrestled with the complexities of the in vitro process as well as the significant financial costs that accompany the "no guarantees" procedure. Were we playing God or just taking advantage of modern medical technology? My biggest concern was what to do with any left over embryos after I had all the children I wanted to have. There was no way I would have any extra embryos destroyed, nor would "donate them to science" to do who knows what with. The only other option would be to donate them to couples who needed them in order to have children. I couldn't possibly give away my biological kids (embryos) to someone else just because I already had all the children I planned. The fear and agony of having to possibly give up extra embryos paralyzed me for two years.

Judd and I began seriously contemplating adopting a baby instead of trying in vitro. We met with an adoption atourney who busied herself trying to match us with the right baby or expectant mom. We joined a crisis pregnancy outreach group. We made an "All About Us" photo album which would be given to birth moms to see if they would pick us to adopt their baby. We had several friends who had successfully adopted locally and internationally. I couldn't stop the nagging feeling in my heart that adoption was not the path for us. I finally settled my wrestling mind and decided that I didn't want to go through life always wondering if we could have had biological children IF ONLY we had done in vitro. I decided it was worth the financial cost even if it didn't work. It was worth the emotional pain even if it was unsuccessful. I would know I did everything I could.

Numerous drugs, shots, doctor's visits, and procedures later, four absolutely perfect embryos were made from my eggs and Judd's frozen specimen. We chose to use two embryos and freeze the other two for a future try at in vitro. With two embryos implanted we had a 50% chance one of them would work. Because everything is so precisely timed, in vitro patience have a blood test for pregnancy just a week or so after in vitro. I went to Judd's office and sat with him just staring at my cell phone for over an hour waiting for the clinic to call. He had someone coming in for an appointment, so I decided to leave and told him I'd just call him when I heard the news. I reached my car and my phone rang. My heart was beating so stinkin' fast. I was holding my breath and secretly begging the nurse to stop with all the pleasantries and small talk and just tell me!! Finally the nurse said, "Well, do you feel pregnant?" What kind of question is that? How am I supposed to answer that? What does that mean? It's only been one week. If I were pregnant, would I already feel pregnant? I replied weakly and in a questioning tone, "um, yes?" She responded, "Well, good, because you're pregnant!"

Judd and I had been married for eleven years and had been longing for those words for nine years.

I raced back to Judd's office to find his meeting had already started. I borrowed his secretary's computer to send him an instant message. I typed, "Congratulations, Judd! You're a daddy!" He wrapped up that meeting as quickly as could and we went out to celebrate our answer to prayer. We were having a baby! The final step in the in vitro protocal was for Judd to give me a gigantic and painful shot of progesterone in the hip every night for eight weeks. Of course it was well worth it.

My pregnancy was a dream. No morning sickness. I worked full time as an elementary teacher until about two weeks before I gave birth. I walked 3 to 5 miles every day until the day I had Sophie. The whole pregnancy and delivery were perfect. On April 12, at 5:55 a.m. we held God's promise of our own child in our arms. Sophia Coco was here and the tears of joy could not be contained. We had overcome interruption #3. 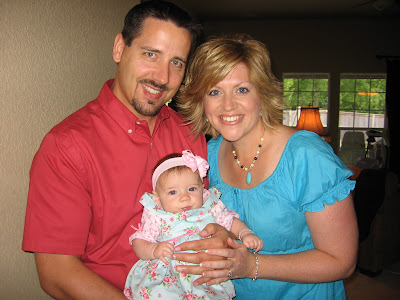